Six lessons Improv is teaching me 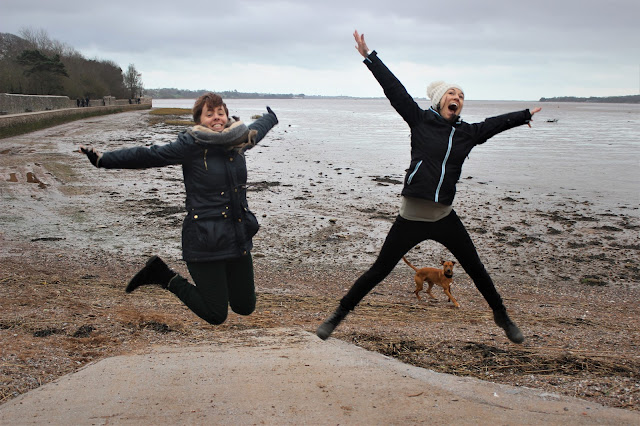 This week I finished an 8 week Beginner's Longform Improvised Comedy course with the Maydays.

Shortform improvisation revolves mainly around games - as you'd see in "Whose line is it anyways?" whereas longform has less structure, allowing a scene to unfold in any direction...

I can't even remember where the idea of trying out Improvisation came from - perhaps a recommendation that I see some on my trip to NYC (although I failed to actually get to a show!) planted some seeds. Then I ended up googling it when I got to Brighton, saw a free taster with the Maydays advertised, went along (back in November), and, well here I am now!

I wanted to do something that would develop my performance skills in preparation for my Fringe show, something creative and fun, but also wanted to learn how to cope better with unplanned situations: not just on stage but also in life. If I have a script, a poem, a plan, then I'm generally fairly confident. But if I have to come up with something on the spot - be that a speech or simply an answer to an unexpected question or a response to any kind of criticism or conflict - then I panic, shrink, seize up. As much as I'd like to be an easy-going person, I guess I'm not always very good at going with the flow.

So improv felt like it could be just the right thing. Of course, life itself is improvised - and for me the lessons learned on a Tuesday evening extend way beyond getting a laugh or playing a character.

Here are six 'lessons' that impacted me and that I hope I can build more into the way I 'do improv' AND the way I am in the world:

1. Say yes! - we were reminded of this again and again - say YES to the first idea that anyone is brave enough to suggest, say YES and build on it - open to explore where it could go, say YES and put aside your own preconceptions of what should have happened, say YES with enthusiasm and energy. It's so easy NOT to say YES; to question, critique, challenge or overide with a different suggestion. I realised how often I do this with the people around me - not consciously or maliciously being difficult but subtly allowing negativity to be my first response.

2. Let your body speak (and listen to it) - there are times when words fail us, disappear, when we're just not ready to speak. Moving our body in a certain way will always communicate something, and then perhaps spark words and ideas that we never knew were inside us. Our bodies are powerful!

3. Less is often more - one of my favourite activities was doing scenes when we were only to say a limited number of words at a time (five, then three, then just one) and then had to let the other person do their quota, before we spoke again. It really hit home the power of slowing down and choosing our words very intentionally. When we panic we often fill the space with words that don't mean anything. These scenes we did were some of the most powerful of the course.

4. Relationship is key - it was very easy in a scene to get hung up on an external 'thing' or activity rather than really explore or even define the relationship with the person/people we were improvising with. And yet from observing each others scenes I think we'd all agree that's what's most engaging. That's what makes everything else make sense. I don't know why it was such a challenge, maybe looking into someone's eyes is uncomfortable because it means they're also looking into ours. Maybe we're scared of what they'll see. Maybe really listening to someone else is hard when our brains are panicking about what to do next.

5. There is no wrong answer - Like saying YES, this was something had to be reminded of every week. There's no script, there's no plan, and therefore you can't actually be wrong. And even the seemingly lamest suggestion can be justified, played with, turned into gold. And yet so often we were nervous, uncertain, vague - not wanting to step out on a limb to suggest what has happening in the scene and help move it forwards. The fear of getting things wrong has paralyzed or distressed me countless times throughout my life and I'd like to not let that define me anymore, especially since my definition of "wrong" is most probably questionable!

6. Everything you need is in you - this is scary and liberating.  With no script, directions, and often no props - everything in the scene has to come from inside us - from our imaginations, our bodies. The magical thing is, those wells are deep and full and totally unique to each person. It was amazing hearing the lines that people in the group came out with, the characters they became, the stories that were unfolded in the moment.


All these lessons were quite obvious when watching other people or upon reflection post-scene, but very hard to hold onto in the midst of improvising. That'll be my challenge now, to build up these new 'muscles' in all parts of life.

To me it seems that we could all learn something from Improv, these are just the highlights!

I can't recommend the Maydays enough, they do a whole variety of courses and also do brilliant shows if you just wanna watch! (They didn't ask me to write this, I just realised I'm telling everyone I see about it so thought it was worth blogging about!).

I'm thankful for a brilliantly energetic and insightful teacher, Liz, and an eclectic group of open, brave and fun fellow improvisors :-) Here's to more in the future!

What are you in to?